The following article is the second in a series by Jerry Strum who has been researching  his Rodden/Rudden ancestors.

Again, many thanks for sharing this Jerry.

This document has been created in a further attempt to answer these questions:

Hypothesis:
This Patrick Rudden born 1830 in Co Monaghan and died in December 1885 in Lanarkshire, Scotland was a cousin or brother of one of the two Hugh Ruddens who were present in the 1861 completed Valuation in Knox East, Killynenagh, Monaghan, Ireland. The case will be made that it was Hugh Rudden and Mary McPhillip’s son, John 1863, who he visited.

Sorting it all out using all gathered information
For this inquiry the following documents were used to establish connections, possible connections, and probable connections: 1827 Tithe Applotment, Baptism Registry for Drumully parish RC, 1901 Irish Census.  Those connections are based on several realities and customs of the times.

So, who did John Rodden from Scotland visit in 1892 in Knox East?
First, a look at the trail of Ruddens during the nineteenth century.  Information is provided through Tithe Applotment, Griffith’s Valuation, the 1901 Irish Census.

There are also two known Rudden connections in Knox West

Of interest in figuring out who John Rodden/Rudden 1865 visited in 1892 are the two Hugh Ruddens.  The one Hugh, born 1836, listed by one source but not confirmed, married to Rose Smyth 1830-1915.  Among their children was a son Charles and a son Patrick (Source: Table 1).  These are names which are in the family of my gr great grandfather, Patrick and his brother John.  This suggests a logical connection.  However there is another Hugh Rudden married to Mary McPhillips, while they used neither names Charles or Patrick for their children they had sons James and  John. It is not know which of these Hughs was the lease holder, however Hugh married to Mary McPhillips, in her will leaves all she owns to her son, John. This is also the family which Alice Rudden said John Rudden/Rodden of Scotland visited in 1892.

The following tables attempt to follow all the residents of Knox using the sources available between 1856 and 1901.

Table 1     Families of Knox East based on RC Church records of Drumully and Knox East Map Valuation Survey completed 1861 of those owning at least 5 acres. This townland in 1861 had 78 acres with 6 houses and 30 people.

Looking at the connections
Locals discuss the Ruddens of Knox East as being the Hymie Ruddens or the Fob Ruddens.  There does also seem to be a group of Philip Rudden, which may or may not belong to the Hymie or Fob group.  The two branches are somehow connected, but records do not go back far enough to discern that connection.  Following is a description of all family members based on the Baptismal Registery of Drumully Parish of the Roman Catholic Church

One of the two Hughs was also the godparent to Michael Leonard and Bridget Rudden’s child, Ann Leonard, born 1862.
Fob Ruden Group (Plot 4 in 1856 Valuation.  This John’s father is Patrick, (Source: Michael Moore).

Table 2   Families of West Knox  based on RC Church records of Drumully and Knox West Valuation Survey completed 1861 owning at least 5 acres. Knox West population increased between 1841 and 1851.
Note: While the name McBride is using in 1856 Valuation Brides or McBrides is used in 1901 census.  The name is always Brides when in RC Baptismal Records even when speaking of folks identified as McBride in government documents as census and valuation of 1856.

Table 3 Those in Baptismal Registry who listed in Knox as  their residence and who had children between 1864-1882 but who did not own 5 acres in 1856 Valuation. 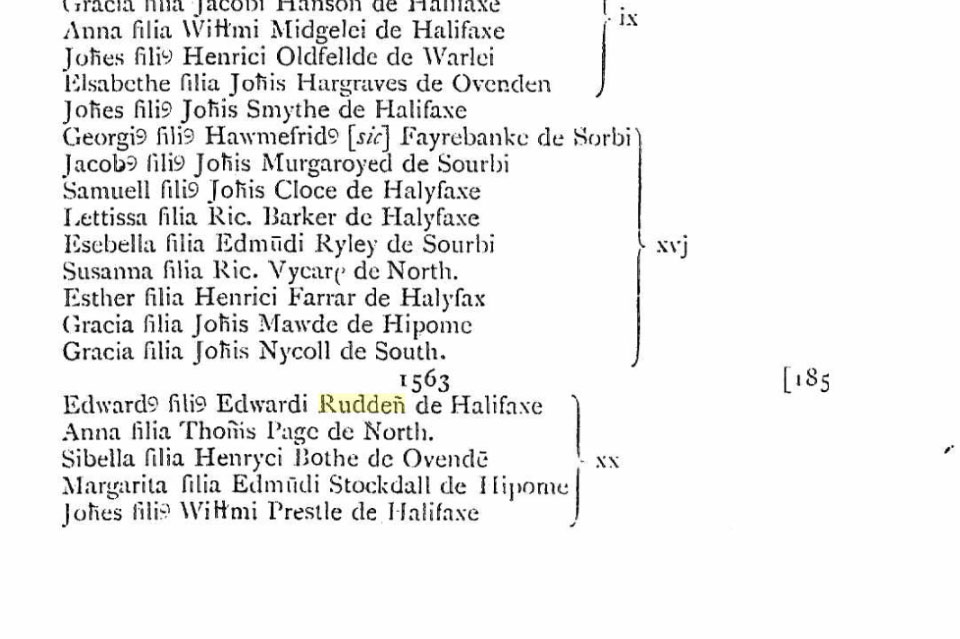